One of the things I immediately wanted to do when we moved to Seattle was start foraging  at the beach. It took nearly two years but I finally managed to wrangle the family together and get out there. It helped that it was mother’s day and I could do whatever I wanted and I wanted to dig for clams. My one request was that no one complain the entire trip, which lasted just until we got into the queue for the ferry. Oh well, it was a beautiful day and we were on our way to Whidbey Island.

I have never been clamming. My only experience was watching a video of Langdon Cook, award winning writer and instructor on wild foods and foraging. I knew what to bring and which beach to go to but that was about it. We arrived at Double Bluff beach at low tide  and to my surprise and relief the kids got right into it and we dug and dug and dug. My 5 year old found one beautiful cockle which she was so proud of and ended up becoming my mother’s day present. I found a huge sea snail and some eels but that was it. Then I realized off in the distance a group of people were digging at the cobbly area near the bluff. So I left the kids to swim with my husband and I set off to dig. After a half hour I ended up with a dozen or so native littlenecks but since the kids would soon be melting down I decided to pack up. Though I will definitely be back soon better prepared and able to leave with a full clam feast.

Back home we fired up the wood oven and I roasted our little gems in some white wine with garlic, shallots and herbs along with some flatbread. Even though we only ended up with just a taste it was so worth it. The kids had a load of fun and any chance they can be in nature and learn where our food comes from makes me a happy mama. 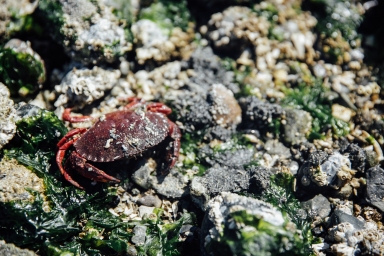 I roasted my clams in a cast iron skillet in our wood burning oven. You could also cook them in a hot oven set at 500º or on a charcoal bbq with the lid on.  I like the flavor the wood imparts on the clams but they will be just as delicious steamed in a skillet on your stove top.

Scrub clams well with cold water to make sure there is no sand remaining on them. Heat a cast iron or heavy duty skillet in the wood oven or on the bbq. Melt butter and oil and sauté shallots and garlic for a couple minutes until soft but not quite browned. Add clams and wine and cover checking after about 3 minutes to see if the shells have opened. Once they have opened, pluck them from the skillet into a bowl and continue cooking until they all have opened. Discard any that don’t open. Pour the sauce from the skillet over the clams and toss in the herbs and a pinch of chili flakes and lemon zest. Serve with a nice bread to dunk into the sauce. 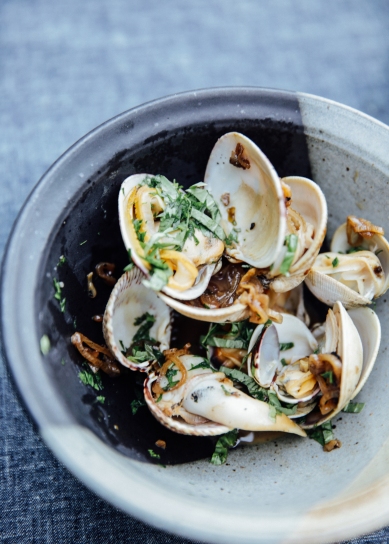 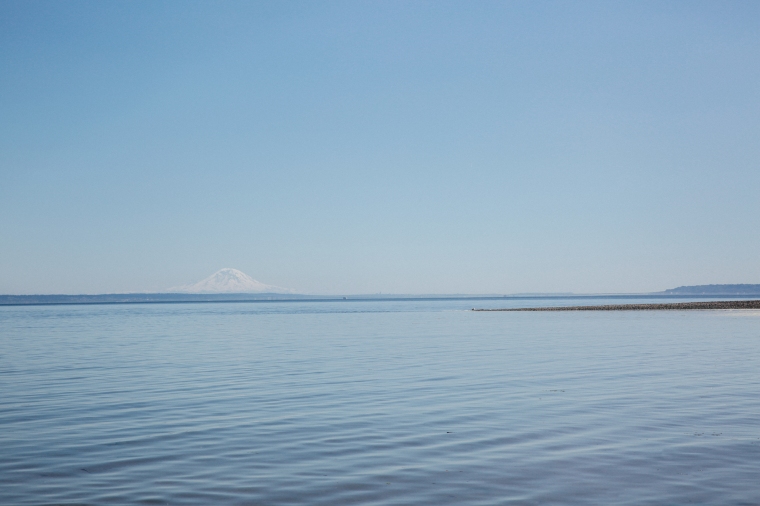